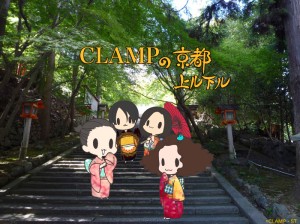 It seems like they heard my complains of last week’s episode. This episode had a lot of interesting and foreshadowing info.

For the opening talk, they read a message from a listener who wrote saying that their favorite work was Tsubasa and GATE 7 (I think?), or maybe they liked seeing GATE 7‘s characters in Tsubasa. They asked CLAMP a question and each member replied and I believe it had something to do with people with important historic roles because Nekoi mentioned Iemitsu and Ohkawa mentioned Marie Antoinette — I’m actually curious to find out what she said about her.

Next, Mokona read a message from a listener who had bought this month’s Shonen Magazine SPECIAL and they wrote about the Nirai Kanai hen reaching its end, so they asked CLAMP about what would come next and suggested that it could well be a “Kinugawa Onsen hen” — this is because CLAMP went there in the beginning of this year to do some location hunt.

After that, the CLAMP members went crazy wondering about the funny things it could happen with the Tsubasa characters in the hot springs of Kinugawa Onsen (the place is famous for its hot springs).

Then, around 8:00 minutes I *think* Ohkawa says that their trip to Kinugawa Onsen was not for the sake of Tsubasa but for the sake of (another) work. But I’m not 100% sure about this. They add that they really enjoyed going there.

I’ve seen people tweeting about the final Nirai Kanai hen volume having a few announcements but again, I’m not 100% sure about this.

Ohkawa joked that Watanuki had been dreaming for 2 months — because that’s how long the manga was on hiatus before the last chapter came out.

Ohkawa later asked the other members what other world they would like to see the gang go to next. Mokona said something about angelic world? Not sure here, but after that they all starting playing with the idea of the gang landing in Rayearth‘s world, the real one and not an alternate version of it. They played with the idea of Mokona meeting the real creator Mokona from Rayearth.

Mokona said (I think) she would like the gang to land on the otherworld where Ioryogi lives. Ohkawa then says that they already visited the Kobato. world in the TV Anime series (she wrote the script for that episode).

They went back to the supposed “Kinugawa Onsen hen” talk and Ohkawa then said “If Kodansha is OK with it, let’s do it”.

By the way, their radio show was originally scheduled up to March, but according to CLAMP-NET.COM’s calendar, it’s been renewed for one more month (for now). So it’ll run at least until the end of April (yay!). After that, we’ll see.

I’m very proud of my summary this time! Yay me xD

The special chapter of GATE 7 will be published in tomorrow’s issue of JUMP Live, according to the magazine official website.

JUMP Live is a digital magazine and at least for iOS users, you need a Japanese Apple account to download the app.

Updated: You can find RAW japanese scans from the chapter here.

CLAMP art exhibition to be held in Kyoto

As part of the “Kyoto International Manga Anime Fair 2013”, a CLAMP art exhibition to be held in Kyoto has been decided. The exhibition will run from September 6 to 8 at the Kyoto Computer Gakuin, in Kyoto.

There will also be screenings of the anime adaptations of Magic Knight Rayearth and Card Captor Sakura with special guests such as Naomi Tamura, Sakura Tange, Kumai Motoko and Junko Iwao.

Admission fees: 900 yens for advanced purchases; 1000 yens on the days of the event.

Below is a very decent version of the new illustration that CLAMP did for the “Kyoto International Manga Anime Fair 2013”:

Very nice tip if you’re in Kyoto around that time 😉 I hope there will be pictures of this.

GATE 7 special chapter to be published in “Jump Live”

It’s been announced that CLAMP will draw a special chapter of GATE 7 that will be published in digital magazine Jump Live, a new online spin-off magazine of Shonen Jump.

This could mean that the relationship between CLAMP and Shueisha hasn’t been compromised and the reason why GATE 7 is currently on hiatus may lay on different, yet unknown issues.

More information as they come!

Thanks for letting me know about this! 😉

This month both GATE 7 and Drug & Drop are on a break, and while this doesn’t seem strange for Drug & Drop (since the last chapter was published last month), it certainly seems strange for GATE 7.

GATE 7 has been on a break since March and the last chapter that was published was an omake (not an actual chapter).

If you check GATE 7’s information on the “CLAMP camera” app, it says that the series is currently on hiatus:

But strangely enough, if you check CLOVER or X’s information, it doesn’t say they are on Hiatus. GATE 7 is the only work with that information. Additionally, the introductory text about CLAMP on the app states that XXXHOLiC and Drug & Drop are the only two active series that CLAMP are working on:

To make things even more suspicious, the official twitter account of CLAMP is no longer following Shueisha or JUMP SQ’s twitter accounts. On the other hand, GATE 7 is still listed as on the series being published in JUMP SQ: http://jumpsq.shueisha.co.jp/rensai Just earlier this week, both Ohkawa and Nekoi went to Kyoto on a business trip, which I believed was for taking more pictures and doing some more location hunt for GATE 7, but I am unsure if that was indeed the real purpose of their trip now.

There hasn’t been any official announcements from either CLAMP or Shueisha concerning GATE 7’s status. The last chapter published in March informed that a new chapter would be published two issues later, but it’s been postponed indefinitely since.

A lot of people were worried, specially all the GATE 7 fans out there, so I made this post in order to shine some light on this matter.

I will keep you posted should anything new come up about GATE 7’s situation, but for the time being, it looks like GATE 7 won’t be appearing in JUMP SQ.

GATE 7 #4 dropped to the 18th position on Oricon's Weekly Charts on its second week of sales, the position that was occupied by Drug & Drop last week:

Unfortunately, Drug & Drop didn't show up in the top 30.

According to Oricon, GATE 7 #4 sold additional 33.923 copies on its second week of sales, which means an accumulated of 173.686 copies sold so far.

It is unlikely that GATE 7 #4 will show up on next week's ranking, but I'll make a post if that happens.

On other news, there was a press conference held at the XXXHOLiC theme cafe yesterday to release the TV Drama adaptation to the press. Director Keisuke Toyoshima and main cast Anne (Yuuko) and Sometani Shota (Watanuki) attended the event.

There are several reports from that press conference on the web, here are a few of them:

Amazon.co.jp has a page with XXXHOLiC products on sale, there is a video with comments from the TV Drama director Keisuke Toyoshima.

It's been 10 days since the joint release of Drug & Drop #1 and GATE 7 #4, the former landed on the 18th position of Weekly Oricon charts while the latter appeared on the 5th spot.

Moreover, GATE 7 #4 sold 139.763 copies in its first week of sales, which represents a growth of 6,4% in comparison to the previous volume. This is the highest-selling first week for a GATE 7 volume so far.

Drug & Drop #1 sold 42.474 copies on its first second week of sales, which is around the same amount of copies that Kobato. #6 (final volume) sold in its first week of sales.

GATE 7 seems to be growing steadily on sales, while Drug & Drop started shy, but not a bad start. It is worth mentioning that Oricon lists Drug & Drop #1 as previously appearing on the 15th postion, that's probably taking into account pre-sales and stores that sold it shortly before the original release date.

Update: One correction in Drug & Drop #1 sales, the actual number of accumulated sales is 70.500 copies so far. That is because this is the second week of sales, having sold 28.026 copies in its first week. That's definitely good news!

I'll keep an eye open for next week's ranking, hopefully GATE 7 will make another appearance.

The official website of the XXXHOLiC TV Drama has launched its Characters and Episodes sections. Check them out.

For those interested in buying the XXXHOLiC Artbook, it is already available for pre-order at CD Japan for US$ 70.30. They ship worldwide.

Seems like CLAMP will be taking a small break this coming month.

The updated schedule is as follows:

Not sure if they will resume the chapter counting from where XXXHOLiC Rou ended or start a new counting for XXXHOLiC Rei (sounds more likely to me).

Our predictions that it would feature Hana and the white tiger were right on! Each volume Hana is featured with the 4 animals of the Chinese constellation: the Vermilion Bird (volume 1), the Azure Dragon (volume 2), the Black Tortoise (volume 3) and the White Tiger (volume 4). Now I wonder how the cover of volume 5 is going to look like… any guesses?

The good thing about CLAMP moving to twitter is that now the covers are posted in a much higher resolution.

On a sad note, for those who haven't seen it yet, CLAMP-NET.COM has official closed last Monday. As previously mentioned, all news are being now posted on their twitter account @CLAMP_News. Hopefully this is only temporary, even if it takes a long time for the website to be reopened.

To promote the simultaneous release of GATE 7 #4 and Drug & Drop #1 on February 4, Kadokawa, Sueisha and CLAMP will join forces to launch a collaboration campaign.

Exclusive goods will be released using as a motif the below image newly drawn by CLAMP, featuring the characters from both series:

More details about this campaign — what the goods will be and how to participate — to be announced soon!

I love the illustration! *-*