CLAMP special feature in May 2022 issue of “Da Vinci” magazine

The May 2022 issue of Da Vinci magazine will have a special feature about CLAMP!

The theme will be “collaborations”.

The magazine goes on sale on April 6.

Really excited about this! This will coincide with CLAMP’s 33rd Anniversary. They did a special feature by the time of their 20th Anniversary.

And the interview is likely the one that Nanase Ohkawa-sensei mentioned a couple of weeks ago on her twitter:

Needless to say I’m very excited about this! First CLAMP interview in 6 years!

It was announced today that a new TV anime series derived from Cardfight!! Vanguard overDress is in production and CLAMP are providing the original character design concepts for it, once again.

The new series is entitled Cardfight!! Vanguard will+Dress and it’s set to premiere in July, 2022.

This is the 10th anime series for which CLAMP provide original character design for. Here’s the full list:

Update: Here’s a first look at some of the new characters for this series.

CLAMP’s cover will be used for both normal and limited editions. The limited edition comes with an oversized poster and a mini clear file featuring the same illustration.

And here’s the poster and mini clear file:

It will be on sale on September 29.

Uma Musume Pretty Derby is a multimedia franchise created by Cygames which includes mobile games, TV Anime and manga adaptations. CLAMP have expressed their enthusiasm for the franchise several times through their social media channels and twitter spaces.

I had to look twice to fully grasp the fact that this was drawn by CLAMP. It certainly looks like their current style, but with a little extra adjustment to make it look more Uma Musume-like. The bright, neon CG coloring is a big departure from what CLAMP usually deliver when they are using CG, although it looks like the cover looks slightly brighter than the poster (which I would guess has the original colors painted by CLAMP).

This is yet another collaboration that came into fruition out of a hobby of CLAMP’s, like many others.

In other news, CLAMP’s leader Nanase Ohkawa-sensei has launched a new twitter account. So far it seems very CLAMP-centric with interesting pictures and “inside” information. She is planning on doing weekly twitter spaces by the morning. Make sure you follow her at @7bunno7.

It was announced today that a new anime for the trading card game franchise Cardfight!! Vanguard is in production and CLAMP are providing the original character design concepts for it. The animation production will be done by Kinema Citrus.

The main key visual (illustrated by CLAMP) can be seen bellow, as well as the staff list:

The anime synopsis was also announced:

The first PV has been announced as well:

According to this tweet below, the anime will air on the official Cardfight!! Vanguard YouTube Channel with English subtitles starting on April 3rd!

According to this other tweet below, a new booster pack for the trading card game franchise will go on sale starting on April 17th. A card illustrated by CLAMP can be found in rare occasions.

What a surprise announcement! The character design looks very much like CLAMP’s current art style.

Just a reminder that this anime is NOT the Netflix collaboration. We still need to see more information about that (hopefully this year). If we have the Netflix anime this year, this would mean that there will be three animes airing in 2021 with character designs by CLAMP: 1) Code Geass Dakkan no Zetto; 2) Vanguard overDress; 3) Untitled Netflix original anime. If you count Tokyo Babylon 2021, that’s four animes related to CLAMP in 2021. Wow!

I am also very happy that the anime will be streamed worldwide in the Cardfight!! Vanguard YouTube channel with English subtitles. It really shows how CLAMP are really concerned about their international audiences, which is great.

I am not sure this anime is my cup of tea, but I’ll be looking forward to the new CLAMP art that might come out of it!

This week’s issue of anan magazine (issue 2230) is announcing that CLAMP will be in charge of the illustrations for a new Haken Anime! spinoff novel series.

The spinoff is entitled Oto to Koe no Bouken (Adventure of Sound and Voice) and will begin serialization two weeks from now, on issue 2232 of anan. The series will be written by the same author as Haken Anime!, Mizuki Tsujimura.

The announcement came in this week’s issue of anan magazine, which also contains a 4-pages recap of CLAMP’s creative trajectory with highlights by Mizuki Tsujimura.

The original Haken Anime! novel was serialized in anan magazine from 2012 to 2014, each chapter featuring a colored illustration drawn by CLAMP. The chapters were compiled and released in book format in 2014. A paperback edition was later released in 2017. In 2019, it received a stage play adaptation.

This is great news! I love the fact that they seem to be getting more active in 2021 ^-^

As part of a joint collaboration project to celebrate CLAMP’s 30th Anniversary and the 40th Anniversary of Kodansha‘s josei manga magazine BE・LOVE, a new celebratory illustration drawn by CLAMP is going to be published in the magazine’s February 2021 issue, which is scheduled to be released on December 28.

The same illustration will be used as a present service that readers will be able to apply to earn it.

Choosing BE・LOVE is an… interesting choice, considering that CLAMP never drew a series for that magazine. One would expect this to take place in Nakayoshi, Young Magazine or even Shonen Magazine.

BE・LOVE is targeted at adult women so that’s what they might be going for — after all, if you grew up reading CLAMP, you are probably an adult by now.

Unless there’s more to it and this could be foreshadowing into something bigger…? I’m probably reading too much into this… but just to give an example, I remember that before Kobato (Temporary)’s serialization was officially announced in Sunday GX magazine, they published a single illustration of Kobato in the issue before. I won’t keep my hopes up but I’m just saying that bigger projects might be born from these seemingly “harmless” projects.

Also, it seems like the 30th Anniversary celebrations are finally kicking in? Please don’t stop! =)

The February 2020 issue of with magazine (Kodansha) will come with a Magic Knight Rayearth & Card Captor Sakura sticker in celebration of CLAMP’s 30th Anniversary.

The magazine will be released on December 26 and it’s available for pre-order on Amazon Japan.

Update: the magazine cover can be seen below. You can see a glimpse of the Rayearth and CCS sticker and unlike what I expected, it is not a new illustration. Too bad. 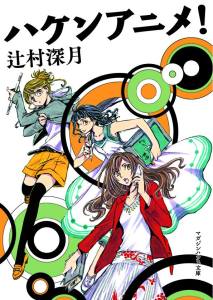 The novel Haken Anime! was written by Mizuki Tsujimura with illustrations by CLAMP. It was serialized in an・an magazine from 2012 to 2014, each chapter featuring an illustration drawn by CLAMP.

The novel was compiled in a book that was released in 2014. Apart from the cover and one inside illustration, none of the other illustrations drawn by CLAMP were included in the book release.

It’s been announced that a paperback version is going to be released on September 6. The cover for this edition can be seen on the right.

If the majority of CLAMP illustrations were not included in the book version, chances that they are going to include them in the paperback version are very slim, if you ask me. That is a shame, since the illustrations were so nice. But who knows?

CLAMP will be in charge for drawing the illustrations for Mizuki Tsujimura’s new novel series entitled “Haken Anime!”.

The series will run in the weekly magazine an・an, published by Magazine House, starting on the October 31 issue. The magazine goes on sale every Wednesday.

Mizuki Tsujimura won the 147th Naoki Prize with her novel “Dreaming Without a Key”, a collection of short stories.

Here is the cover and back cover for the “CLAMP Pia” mook, taken from CLAMP FESTIVAL’s website:

It will be released on September 22. For those interested, you can order a copy on CD Japan.

Here is a 15 second video preview of “Kaze, Sora”, the single by Kinya that will be the theme song for CLAMP FESTIVAL 2012:

I am guessing this is part of the actual PV that is produced by PRODUCTION IG (it looks very cheap, if I may add).

On other news, for those who were worried about the future of our favorite website, CLAMP-NET.COM, I sent an e-mail to the site’s administrators and they replied to me saying that more information will be announced on the website in due course.