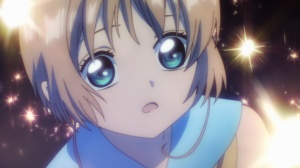 Card Captor Sakura Clear Card TV Anime is being broadcast in several countries around the world via online services in a simultaneous or semi-simultaneous fashion. Please check the guide below to see if your country is included:

If you watch the anime via one of these channels, you’ll be supporting the creators and helping to make Card Captor Sakura even more popular worldwide.

This is not really a review. I had written a very long review for the episode but I lost EVERYTHING because WordPress didn’t save my draft and the session expired or whatever and I simply do not feel the motivation to write everything again.

I am really sorry if you were looking forward to read this review and I apologize for being late and not very active for the past month. I have spent the last month traveling on vacation and couldn’t really find the time to update my site as I normally would.

I just want to say that the episode was good, specially at the end because there was a twist. A twist of a twist. At first everybody thought the identity of the Mysterious Cloaked Figure would be Akiho, then CLAMP surprised us by showing Syaoran in the manga. Then, everybody assumed that the anime would follow the manga and show Syaoran in this episode too, but then CLAMP surprised us by showing Akiho. We have been fooled twice.

I really had a lot more to say but I will leave that for upcoming reviews, for both the manga and the anime. Since this was not the final episode, there will be other episodes to review.

Regarding my hopes for season 2, I think I would like it to have less episodes, if less episodes means better animation quality. I just prefer a shorter but better animated season than a longer but with underwhelming animation. I think 13 episodes would be enough, but it also depends a lot on how much longer the manga will last.

Thank you for sticking around and reading my reviews during this “ride”. See you next season!