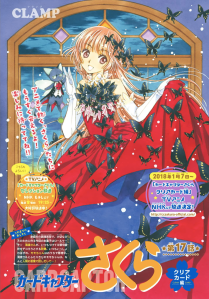 DISCLAIMER: If you enjoyed reading this story, please support CLAMP by purchasing the original or licensed material available in your country.

Card Captor Sakura is available for purchase at CD Japan and Amazon Japan with worldwide shipping.

What a LOVELY title page! Ruby Moon is lately rocking every time she appears on a color illustration (remember the volume cover of the Nakayoshi 60th Anniversary edition?). This is giving strong XXXHOLiC vibes for all the butterflies, except that if it were in XXXHOLiC, the butterflies would be a pattern in her dress, which doesn’t seem to be the case here. Very gorgeous.

Sakura is so cute talking about Rika, she sounds so excited. So, the book that she borrowed from Rika is a pop-up book of Alice in Wonderland. That’s very thoughtful of Sakura, thinking about Akiho like that.

Then something really bizarre happen and everyone’s roll cakes come to live. The roll cakes are friggin’ adorable, by the way. Sakura puts everyone to sleep using SNOOZE, except Tomoyo? I wonder if Sakura has such power that she can sort of *choose* who is going to be affected by the card.

Sakura uses SPIRAL for the first time to wrap all the crazy living roll cakes and secures the card, which is revealed to be called APPEAR and it’s the first card with human form. I wonder if we’ll be seeing more human-shaped cards from now on…

I am not quite sure what this card does but I’d think it life to unliving things?

Also, the fact that Sakura mentioned that she learned that word recently is very suspicious. It’s like something or someone are creating these cards on the go based on Sakura’s current life experiences.

The talk between Momo and Yuna at the end of the chapter makes it look like Yuna is the one who are creating the cards. Specially how he reacted to the roll cake story that Akiho told him.

And they are trying to stop the time for the Alice in Clockland book…? Yuna can’t do it himself even though he’s a very powerful wizard (he’s ranked “D”) so he needs the cards for that. I guess it all comes down to what will happen when the book’s time runs down.

22 pages for this chapter. It’s sad but it looks like we are getting 20-pages chapters more and more recently — 97 pages for volume 4 so far.

Next chapter will be out next month!