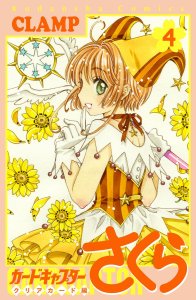 The fourth volume of Card Captor Sakura ~Clear Card arc~ debutted at the 4th position in Oricon’s weekly ranking, with an estimate of 96,597 copies sold in its first week of sales.

The above numbers are for the regular edition, only. Sale numbers for the Special Edition (smartphone goods) are unknown.

At first, these number may seem low, but considering that the books were released on March 30, they only had three days of exposure on this ranking. Taking that into account, these are actually pretty good numbers for only three days. We should get a clearer idea of how volume 4 went by the next week sales report.

It is worth mentioning that Oricon only takes into account a certain number of shops. These numbers are only an estimate and it’s possible that the real figures are higher than these.

Great “first week” sales for volume 4! This is probably going to reappear in rankings for the next few weeks. Stay tuned!