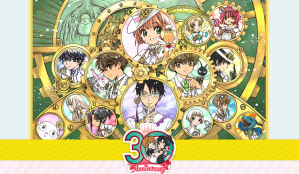 With only a few days before the end of 2019, CLAMP and Kodansha surprise us all with the launch of a CLAMP 30th Anniversary special site!

The website is called CLAMP-FANS and its address is https://clamp-fans.com/

The website is maintained by Kodansha and it’s meant to distribute information for CLAMP fans all around the world. Therefore, the website is available in 6 languages: Japanese, Chinese, English, French, Spanish and Portuguese (so happy about this latter!).

CLAMP’s 30th Anniversary Projects and related information will be uploaded on this website.
In addition, the content on this site will increase, including a shopping site, where you can purchase special CLAMP goods, and Kero-chan’s photo diary.
We will make it a site that CLAMP fans all over the world can enjoy, so stay tuned.

To kick things off, the latest chapter of Card Captor Sakura Clear Card arc, Chapter 40, is already available to be read in all 6 languages at CLAMP’s official YouTube channel!

I can’t even begin to process just how AMAZING this is. Not only we’re finally getting ourselves a proper 30th Anniversary project (thank you, Kodansha!), but also the international fans are being included! ♡ Being able to legally read a new chapter of a CLAMP manga on the same day — or in this case, even before the release date in Japan — was unthinkable until now! This is truly an amazing Christmas miracle/gift.

I am looking very much forward to the other contents to be added to CLAMP-FANS! ♡

Thank you so much CLAMP and Kodansha for including us, fans that don’t reside in Japan.

Update: The Clear Card chapters will be available on YouTube in all 6 languages every month 2 days prior to the release of Nakayoshi. This is a measure Kodansha is taking to fight against piracy and an acknowledgement of CLAMP’s international readership. More languages expected to be added in the future.