Q1. What was the reason behind the decision to have Syaoran and Sakura play the leading roles out of all of the fascinating characters from CLAMP’s works? 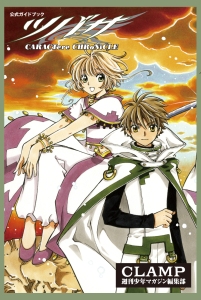 A1. It’s because we thought they were the easiest characters to understand.

Side column: What is Card Captor Sakura?

A CLAMP series serialized in Nakayoshi (Kodansha) from 1996 to 2000. It is celebrating its 20th anniversary in 2016, and with a new series beginning serialization, it’s growing in popularity.

Q2. How did you create Fay and Kurogane, the original characters of Tsubasa?

A2. We decided on their names from the very beginning, and from there added on their character images.

We planned for Fay to be Yuuy’s twin, so his image [centers] on symbols of their mutual resemblance. [We thought,] should Kurogane’s name have more a sense of representing his body? We gave him a thematically-charged code-name, one that wasn’t his true name. After we decided on both of their names, we designed them from there.

Q3. What exactly was the starting point for the idea of the “copies,” which are a major component of Tsubasa?

A3. It was that we wanted to depict protagonists who had the same outward appearance, but were different people. (And since there are many twins within [our works]…)

We wanted to try [a situation where] the protagonist from the beginning and the protagonist who came around by the ending had the same outward appearance, but were different people, and… Since twin characters are normally common in our comics, we decided to do something different from that. However, it was just difficult to have only their outward appearances be the same – to have them be a different person about whom [the reader] didn’t know anything up until now – so because of that, we had them share memories.

Side column: The Twin Characters of Tsubasa

Twin characters are unusually common in CLAMP works. Let’s touch on some of the characters introduced in Tsubasa as twins.

Fay and Yuuy: The two were called the twins of misfortune, and as a result suffered tragically. We definitely wanted to see what they would have looked like had they grown up together.

Kamui and Subaru: They weren’t related in their debut series X, but in the current work, they appeared as twin brothers in the Tokyo arc.

Q4. What did you pay attention to when depicting the idea of characters such as Copy Syaoran, Sakura, and so on living in other worlds, having the same souls, but having different existences?

A4. We distinguished the characters by staying conscious of their pre-established environments.

Because we made their souls the same, and because they’re the same people [living in] parallel worlds, we basically made it as such that no matter the world, they didn’t change very much. However, we think that if the world changes, differences in environment ought to bring about some differences in personality, so we paid attention to those differences. In regards to the original Syaoran and Copy Syaoran, we endeavored to depict them as being fairly different outside of their earnest aspects, too.

Side column: Parallel beings created from the feathers

The worlds in which the two Chii were made are different, but they [both] had their origins in Sakura’s feathers. Can’t this be said to be another meaning for “same souls, different existences?”

Q5. Are there any connections in particular that you liked out of the roles and relationships of the characters sourced from works outside of Tsubasa?

A5. We liked the setting of Kamui and Subaru as twins in the Tokyo arc.

It’s basically the same thing for characters who were introduced in other works – by virtue of [the concept of] the same people across parallel worlds having the same souls, we depicted them without any extreme changes in Tsubasa. Even so, we ended up changing Kamui and Subaru from the Tokyo arc quite a bit. It’s not as if there’s a great resemblance between them, but we made them into twins. It was a lot of fun drawing the two of them.

Q6. Were there any scenes or characters that underwent a major change between the very first drafts and the ending of the writing for the Nirai Kanai arc?

A6. [The story] fundamentally went as expected, but Fay’s ending changed.

We wrote Tsubasa itself fairly decisively from the beginning. However, out of the main characters, we originally planned for Fay to die, so that part was a big change, wasn’t it? It wasn’t a simple matter of “because it [would have been] pathetic,” but rather we mulled over whether or not it was right to have him part from his comrades at that point, so we changed [his] ending.

Side column: Was Syaoran’s teacher actually him…?

There were other altered scenes, as well. In fact, [CLAMP] states that the plan at first was for Syaoran’s teacher to not be Seishirou, but Subaru. This was a rare incidence where [CLAMP] struggled to make a decision until the very end.

Q7. [We know] Tsubasa features many different characters from CLAMP works, but how did you decide on the various worlds that appear?

A7. We first created the appearances of the worlds, then cast the elements that suited them.

At the beginning, we decided on a rough image of what kinds of worlds [would appear]. With that in mind, we decided on the kinds of roles the characters in them [would play], and based on that, we scrutinized which characters from which works would appear and then cast them, that kind of thing. The appearance of [one] world had mechanical and scientific elements, so we decided on CLOVER characters for the cast, and so on, narrowing it down to a certain degree and finalizing it.

Q8. Tell us about a character that would have interesting interactions with Watanuki, the other Syaoran.

A8. It would be interesting if [he] got to have more conversations with the white Mokona.

It’s because Watanuki has a lot of links with Syaoran and Sakura, right? To focus on another character, we think it would be interesting if [he] interacted with the white Mokona more. They’ve met, but they haven’t had any personal conversations, there are a lot of everyday connections with the black Mokona – we wonder about what Watanuki would think about the white Mokona’s cute way of talking.

Nanase Ohkawa coined a new word, utsushimi (写身), to describe the duplicate versions of Syaoran and Sakura that appear in the story. Most fans translate this word as “clone,” but I don’t think that’s accurate. “Clone” has biological connotations that aren’t present in the original, and my impression is that Ohkawa created her own term in order to avoid introducing a hard sci-fi element to the story. (For some background, the Japanese term for genetic clones is kurōn (クローン), a loanword from English.) The first character in utsushimi appears in words related to photography and photocopying, so it gives a sense of external duplication – that is, the sense that Syaoran and Sakura are perfect physical duplicates, but not necessarily emotional duplicates. It also underlines how Feiwang Reed views them: easily reproducible and disposable. For that reason, I’ve translated utsushimi as “copy” throughout the text.

Translated from Japanese by Panicle.