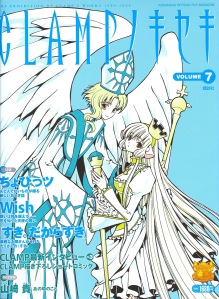 When did you come up with the idea for the story?

Ohkawa: We came up with the original form a long time ago– we used to talk about how cool it would be if computers could talk.
Igarashi: The only thing our computer at the time would say was “Error, Error”. It never told us, or gave the slightest clue, as to what was the matter.
Ohkawa: Afterwards I changed the story some, orienting it towards and adult audience, and got the cast and story okay-ed by Young Magazine.

Being your first publication in a magazine for young men, were there any ways you were confused? Similarly, how was the readers’ reaction?

Ohkawa: Since we decided first that we wanted to make this story, and then we took the concept to Young Magazine, we weren’t at all confused. We got a lot of letters saying that Chii-chan is cute. But then, midway through the series, complicated issues came up and the story became serious… I think there were people who just wanted to restrict the story to about Chii-chan’s cute daily life.

The readers were disappointed.

Ohkawa: I don’t know about that. If you look at it the opposite way, there seemed to have been a lot of people wondering why CLAMP were making a Love Comedy, and who thought that we shouldn’t waste our time on it. Though personally I’m a fan of Love Comedies. *laughs*

Why did you make Chii a computer and not a robot?

Ohkawa: The Japanese have a tendency to accept robots being personified, which makes it easy empathize with them, doesn’t it? But computers have a stronger association of being just an electronic appliance. We decided to use computers to stress the fact that they weren’t living beings.

It it more challenging to empathize with a computer as opposed to a robot, isn’t it?

Ohkawa: I think so. With me, I was strongly influenced by Astro Boy into feeling pity for robots. It’s the same with androids, due to Cutie Honey. I think that Japan’s culture raised us to feel a sense of tragedy about robots.
Mokona: It seems as though there’s a part of Christian religion where they feel incompatible towards artificial creations that resemble human beings.
Nekoi: I think, because of that, Japan may be the first and the only country in the world who wants to create a robot like Astro Boy.

How did you come up with the theme of love between a human and a non-human?

Ohkawa: I love stories about marriages between different kinds of beings, but in Japan many of those tend to end unhappily, and I hate that.
Nekoi: In China there are stories where the human gets to marry tree spirits, and stuff like that. *laugh*

Why the title “Chobits”?

Igarashi: Nekoi was calling the drawings around the work-place “chobi”.
Ohkawa: And because there are two “Chobi” she called them “Chobits”. We thought it was so cute that we kept it just like that. *laugh*

Were there any differences in what you initially imagined?

Ohkawa: I had meant to gather up all the typical characters of a Love Comedy (geared towards males). There’s the older woman who lives downstairs, the cute underclass-girl, and I had meant to add a childhood friend, but she ended up not appearing.

How had you meant to tie her in?

Ohkawa: Originally she was going to disapprove of the fact that Motosuwa was in love with a computer, but then Yumi took over that role, so we had no more need of her.

Please tell us which characters were easy and hard to create.

Ohkawa: Actually, it was hard to pin down Motosuwa beyond feelings– ie, what motivated him. It was very difficult to set down how he was “a good person”. We thought it might be nice if he were a short-tempered character, like Fujimoto-kun in Kobato, someone who would be healed by Chii-chan. We also considered using the kind of clown that often appears in games, one that has perverted thoughts every morning when he wakes up, but we didn’t think that kind of person would fall in love with Chii. In the end we created a character that doesn’t do bad things, a penniless rounin[1], a sort of middle-of-the-road type, but… I did this knowing that it’s easier to manipulate a character with set habits.

What artistic materials did you use?

Mokona: For the main drawings I used ball pen. I have never gone through so many ball pens as I did while drawing the series. *laughs*

Why did you use ball pens?

Ohkawa: I wanted lines that looked like they were drawn by pencils, something kind of rough.

Lastly, please tell us your feelings as you look back on this series now.

Ohkawa: In a way, it was filled with all sorts of things that we love.
Mokona: Robots, computers, cute girls, twins… and we had fun drawing all those frilly outfits. *laughs*
Nekoi: The schedule was a bit tight, but I think we had fun.

[1] Rounin: a lordless samurai, especially one whose feudal lord had been deprived of his territory

Translated from Japanese by Bell (usomitai).