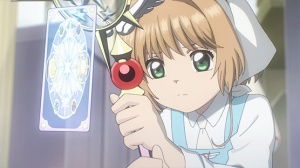 Episode 17 – Sakura and the Crazy Sweets

Card Captor Sakura Clear Card TV Anime is being broadcast in several countries around the world via online services in a simultaneous or semi-simultaneous fashion. Please check the guide below to see if your country is included:

If you watch the anime via one of these channels, you’ll be supporting the creators and helping to make Card Captor Sakura even more popular worldwide.

So we’re back to following the manga more closely with this episode.

What really matters now: Momo finally spoke! I really like her voice. It is a bit softer than I expected, and kind lazy too, but I think it fits her. I think they could have introduced her speaking before, I feel like Momo is a true attention grabber whenever she is on scene. Also, I love how when she “opens” her eyes, she doesn’t really open them LOL

The battle scene with APPEAR was a real mess. This episode’s animation quality was a mess to begin with, but the battle scene itself was even messier. For a second I forgot I was watching CCS and it seemed like an episode of BLOOD-C xD (not good) This battle scene looked when better in the manga.

Now that we know that the clear cards are being created by Sakura herself, in hindsight we can tell the clues that CLAMP were giving, like when she secures APPEAR and realizes that she just learned the kanjis from its title.

The scene with Akiho and Kaito was interesting. There was a portion of the dialog that was never in the manga. The part after Akiho faints and Kaito tells “her” that the mere fact that she was asking him to laugh made him very happy. I wonder if that will turn out to be an anime-only subplot or it was editted out of the manga for other reasons. Somehow, it made me think that Akiho wasn’t always like this, like we are seeing her. Her reaction surprised Kaito is a very alarming way.

Then, it appears that Kaito is looking into Akiho’s mind and watching the dream sequence that happened earlier on that day with Sakura. Is he rewinding back her memories again? Or simply watching them? The pointer of the clock in his magic circle was indeed running backwards.

I’ve said this earlier but I’ll say it again: the animation quality in this episode was a big let down. I can’t think of any episode worst than this one. The faces looked weird and out of proportion in many shots, not even Sakura, whose design is always flawless and on point, was safe this time. Eagle eyed fans spotted the wrong card (AQUA) when Sakura was casting SPIRAL. I sure hope these will get fixed for the DVD/BD release.

Next episode BLAZE will finally appear! Only 5 episodes left, guys.