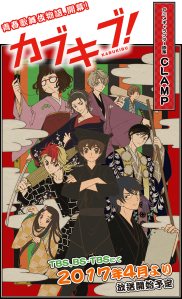 CLAMP will be in charge of the character design concept for the TV Anime adaptation of Yuuri Eda’s light novel series Kabukibu!

The series revolves around Kurogo Kurusu, a high school student who loves kabuki so much that it’s annoying. Kurogo yearns to perform kabuki as part of a club at his school, but currently his school doesn’t have a kabuki club. So Kurogo sets out to create a kabuki club, and his first order of business is to gather members. (ANN)

The series is published by Kadokawa and the 5th volume will be released on November 25.

The TV Anime series will be animated by Studio Deen and is scheduled to start broadcast on TBS in April 2017.

A clean, text-less version of the key visual by CLAMP can be seen here.

It looks so nice! I hope the anime will follow the color scheme of that promotional image — althought that looks more manga-ish than anime.

Looking forward to new CLAMP art for this!

7 thoughts on “CLAMP to do character design concept for “Kabukibu!” TV Anime adaptation”