A Kobato. break? How sad!

A big break there at the end of April since Tsubasa won’t be carried in the double issue. Chapter 220 should be published only on May 6.

CLAMP-NET.COM reports that XXXHOliC is taking a break on issue #18, but it must be a mistake because Chapter 177 was carried in that issue for sure.

Now I’m going to talk a lot a little about the new layout!

I love that they are using art from their mangas, I don’t think they have ever done this, not in this level. I wouldn’t mind a bit of original art, though, it was something extra we could get from their website.

I think it’s too black and white. I wouldn’t mind a few more colors. The images appearing in the homepage could be colored, but I understand that it’s much easier to deal with black and white, design-wise.

I love the attention their other works are getting. It’s good to see X, Gouhou Drug and CLOVER getting some attention! Also, the official banner of CLAMP-NET.COM now shows their current 6 unfinished works:

That was a nice decision.

The News section looked a bit confusing at first, but it takes some time of getting used to it. Again, they have filters to see news for each of their works individually. Also, there’s an option to see the news in english! I so knew they would add something in english for this renewal, seeing how they’ll be aiming Mangettes to an english-speaking readership too.

The Profile section, apart from having the usual basic info about the 4 members (no new images though ;_;) now has a huge timeline about CLAMP’s history starting way back in 1987 when they released their first doujinshi. Very useful information, I loved it!

They have a new Character section, listing all their characters with some basic info on each. In adittion, it shows a list of CLAMP works for which that character has already appeared on. Very nice touch.

There’s a Special section now, where now houses some extra information like Code Geass, CLAMP animes that are currently airing, book covers drawn by CLAMP. This is where the private section of CLAMP@MOBiLE will be kept starting on July 1st. Very much looking forward to that. I think they shall add there any additional info which doesn’t suit in the other sections.

What else? Ah, two things I noticed! The preview pics of covers are now bigger, to our delight! 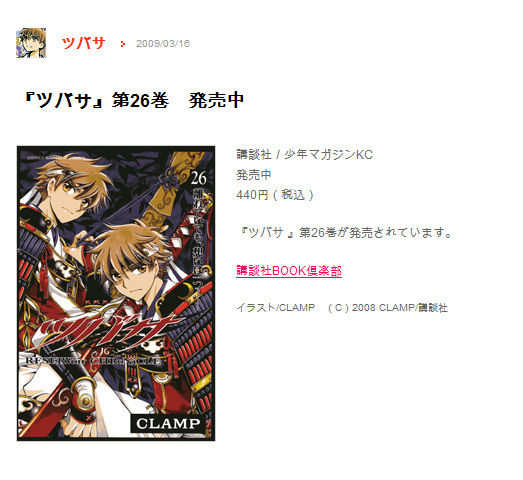 The Links section from former CLAMP-NET.COM is gone.

The news about today’s update informed that we can expect some words from CLAMP themselves, I really hope that will be the case!