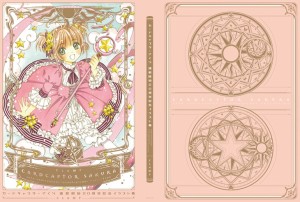 Here’s the front and back cover of the upcoming Card Captor Sakura 20th Anniversary Artbook. The book will come in a shiny clear case in which the design matches the one for the Nakayoshi 60th Anniversary re-edition.

The artbook will be released on March 24. You can order it online from CD Japan, YesAsia and Amazon.co.jp.

It’s been also announced that the lolita brand of clothes BABY, THE STARS SHINE BRIGHT will release a collaboration dress inspired by the one Sakura is wearing on the artbook cover.

Don’t you think the spine looks a bit thick for a 144-pages book? But I guess it’s just the clear case… plus, there’s also the chronology poster.