Firstly, XXXHOLiC chapter 83 is in there !!! Yeeey! This time, ladydarkmoon did the amazing job ! I didn’t even bother to edit them because they look just great !
I have to say, this girl, Ali-san, it’s incredibly kind ! Thank you so much for everything, all your effort, really ^___^ *hugs tightly*

This chapter comes with an AMAZINGLY GORGEOUS color page (one of my favorites so far! Yuuko is so fancy), and it’s a totally out-of-place thing. I mean, usually color pages comes with the beginning of a new tank… and they usually are 4. This one was probably a commemoration for the movie, does anyone know if there’s something worthy saying on that page? I loved the “Created & Melted & Produced … By CLAMP”.
There’s also some pages about the movie with some new caps on the file.

I forgot to mention (I actually didn’t notice) that Kobato is ALSO featuring the cover for Sunday GX’s September Edition, as you can see.
There are some things I’d like to say… things that passed through my head when I first saw it:

– I know there are -enough- proofs and it’s more-than-proofed that Mokona does Kobato main art, but in this new pic, the hints are -everywhere- XD I mean, Kobato is wearing a KIMONO in the middle of SUNFLOWERS… what more do you want? XD
– Another thing I noticed was how BIG the name CLAMP is… I know it’s not the first time we see a thing like that but I never commented about it… How big is the name of CLAMP in the manga industry… I mean, usually, we see the name of series very big (when it’s famous) and, sometimes very small, underneath it it’s where the name of the author is located. But with CLAMP, it’s always very BIG, sometimes even bigger than the series’s name (as in this case). I just love that ^^

According to my counts, this should be the last chapter for tank 1. So, probably, the first volume should be released soon, on September or October.

I got a bigger version for the Tsubasa goodie from CLAMP Su: 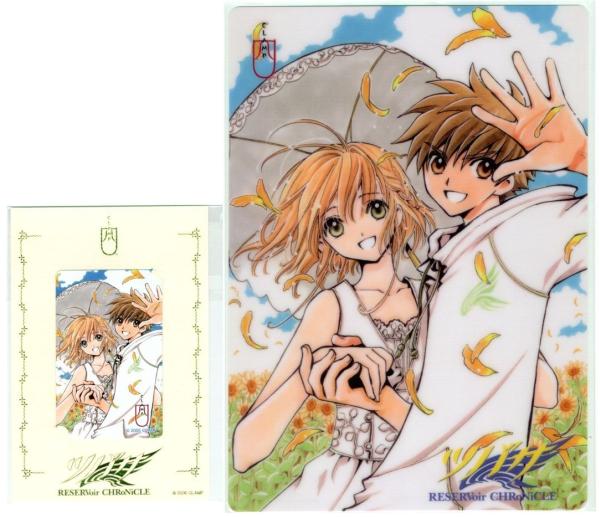 Pretty and peaceful, isn’t it?